Anatomy of a bedtime routine 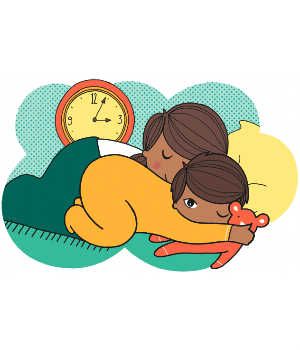 So our almost-two-years-old woes continue. The fridge is still a chilly playground. This week Adoti got to the ‘byed’ and decided to arrange the entire packet on the sofa. Why? Just because. I swear I turn my head for one minute and the child has found a new outlet for her deep reservoir of mischief. I’m seriously contemplating attachment parenting, you know, where you go through the day with the child either on your back or in your arms. Because clearly if I don’t have my eyes on her, that’s a clear indication in her mind that it’s time to hatch the next plot to knock Mama right off her rocker.

But enough with the whinging. That’s what almost-two-year-olds do. It’s par for the course. The way of the world etc. And Adoti and I are on good terms for the most part. We have our own special way of navigating this mother/daughter thing. We have a routine – unorthodox though it may be – that gets us through the day.

And perhaps the most peculiar is our bedtime routine. I get home about one and a half hours to Adoti’s bedtime. Those 90 minutes before she’s supposed to hit the sack are mostly peaceful, apart from the odd fall from the arm rest, and the frequent spillage of water on her jammies.

But as soon as the bedtime hour strikes, things take a sharp turn for the absurd.

I usually begin with, “Time to sleep Adoti,” in an annoying sing-songy voice because I know how it gets her goat. As soon as the words leave my mouth, she squeals and throws herself on the floor, managing to hold her head so that it doesn’t hit the ground. Then she begins to kick her legs in the air, yelling: “Ah-ah, no no!”

“Yes mum, it’s time to go to sleep. Every child in Kenya is dead asleep. Why do you want to be the exception? Huh? Tell me Adoti, why?”

She gets up off the floor and flings her arms wide open, yelling: “Hug! Hug!”

I can’t resist giving the little imp a hug even though I know that she’s attempting to play me like a rugby sevens game. So I give her a big hug during which her arms lock around my neck in a vice-like grip because yeah, if she’s literally stuck on me there’s no way she can go to bed.

She loosens her grip and slides to the ground in one quick movement. As soon as her feet hit the ground she takes off to squeeze herself into the tight corner between the wall and her playpen. She throws her hands over her eyes in such dramatic fashion that I’m tempted to give her an Oscar right there on the spot. Two seconds in, she spreads her fingers and peeks out, probably hoping that I’ve given up, gone to bed and left her up to her own devices.

“Doh-tee, it’s time to sleep. No for joking mum, it’s well past your bedtime,” I say, all stern and no-nonsense-like.

At this point, she knows that things are getting thick. Mama is not giving in and it’s beginning to look like she just might have to go to bed. Worse still, she might actually have to close her eyes and sleep. A fate worse than death for an almost-two-year-old. Sleep is for old folks.

I can see the wheels turning in her head as she stands up and takes a few cautious steps in my direction. And yet, I hold on to the hope that the battle has been won.

“Good girl Adoti! Good girls go to sleep when their Mamas tell them to. Let’s go then.”

I’m surprised when she raises her arms signalling for me to pick her up because deep down I’m still expecting some resistance. But there is none. Oh, good, I think to myself, I’ve convinced her. I pick her up and start making my way to the bedroom. We get to the kitchen door and as I’m reaching out to switch off the lights, I hear the sound of my daughter’s voice.

“Tea! Byed-oh!” she says, pointing at the fridge.

“I knew you had something up your sleeve,” I mutter to myself as I warm up some milk and butter some bread. She eats one or two bites and decides that she’s had enough.

This time we make it to the bedroom. I’m overcome with relief as I hit the lights and begin to lay her down. Just as her head is about to touch the pillow she yells: “Ah-tah!”