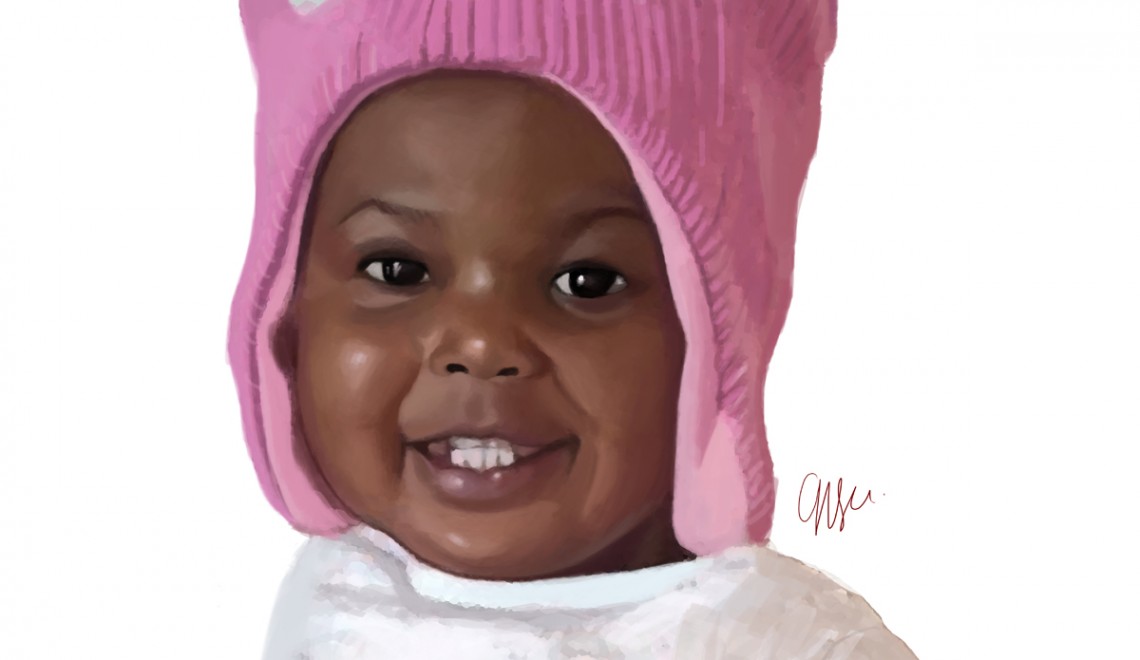 There’s never a dull moment at our house. We just keep going from glory to glory. This week, Adoti got to my coffee again. I had left my mug on the counter, far enough towards the wall so that her little fingers wouldn’t reach it, or so I thought. Obviously thinking things through is not my strong point.

I came into the room to find the little imp sitting comfortably on the chair, with her fingers wrapped securely around the mug. It’s plastic, like almost everything else in my house these days. She was gulping with gusto, some of the coffee ending up in her mouth but most of it splashing liberally on her fresh clothes. Clearly, Ms Adoti was in a mad dash to down the contents before her Ma’ caught her coffee-handed.

I wanted to strangle the child. Especially because an hour before, she had pulled the same stunt, only that time she had decided to miss her mouth repeatedly and in so doing, drench herself in water.

So by the time she was showering herself in caffeine, I had already changed her twice, once when she woke up (out of her pyjamas) and once after the water incident. The coffee made three strikes. And Mama was mad.

“Bad, bad, bad girl Adoti. How many times have I told you not to play with Mama’s things?!!” I yelled, all the while thinking that I was not supposed to call Adoti a bag girl, rather I was supposed to explain to her that what she had done was bad.

The thought made me even madder. Which 19-month old is going to understand that “Mama hates the sin not the sinner” logic? And why was I shouting at the child while I was still so upset? Why couldn’t I do anything right? Why didn’t I push the coffee closer to the wall? What crime did I commit to warrant this kind of punishment? Why was this child trying to kill me? Where would I find my mind? Because clearly, I had lost it.

As all these thoughts were going through my head, it occurred to me that Adoti was taking things rather calmly. She had not made a sound. Had not shed a tear. Instead, she was staring at me defiantly, eyes as cold as marbles, lips in a straight, mutinous line. She did not look remorseful. She looked annoyed. As if to say, “Why are you calling me a bad girl? I’m going to get you for this Ma”.

For a moment there, I was taken aback because my Adoti has a deep well of tears which can be pumped out on demand. Why wasn’t she bawling? This was a girl who would normally wake the gods with her cries at the mere suggestion of censure. She was strangely silent. A-ha, I thought to myself. So the child can turn the waterworks on and off at will! Cheeky lil’ miss! I stored that revelation away for future reference.

Eventually, we kissed and made up, by which I mean, I attempted to kiss Adoti and in return, she tried to make a meal of my lip. All fun and games, I assure you. Minutes later she was demanding to watch “Dowa” (Dora the Explorer) and all was right in the world.

Later that evening, Lucy, Adoti and I were sat in the living room having supper. Adoti was doing her usual travelling routine, which is running from one side of the room to the other between mouthfuls. After a while, she settled in her favourite corner and became still. Uh-oh, I thought. That can only mean trouble. Her eyes were darting back and forth between Lucy and me as if she was watching to see if we were watching her. Eventually, she began to pull on those baby-button things that hold pyjamas together. Within seconds, the jammies were on the floor. Then she began to tug on her tights. Moments later those were discarded too. She had on a romper underneath, which was quickly unfastened as well.

She tried to get it over her head but it got stuck so she abandoned that idea and decided to go for her diaper instead. Shortly, that was also lying on the ground. The child was now naked from the waist down. You would think that was enough, but no. She lifted the tail ends of her romper to chest level and began to run around in circles, shrieking like a banshee.

Sigh. You can give birth to a child in the city, but you cannot take the villager out of them.