Stop it! Say what? 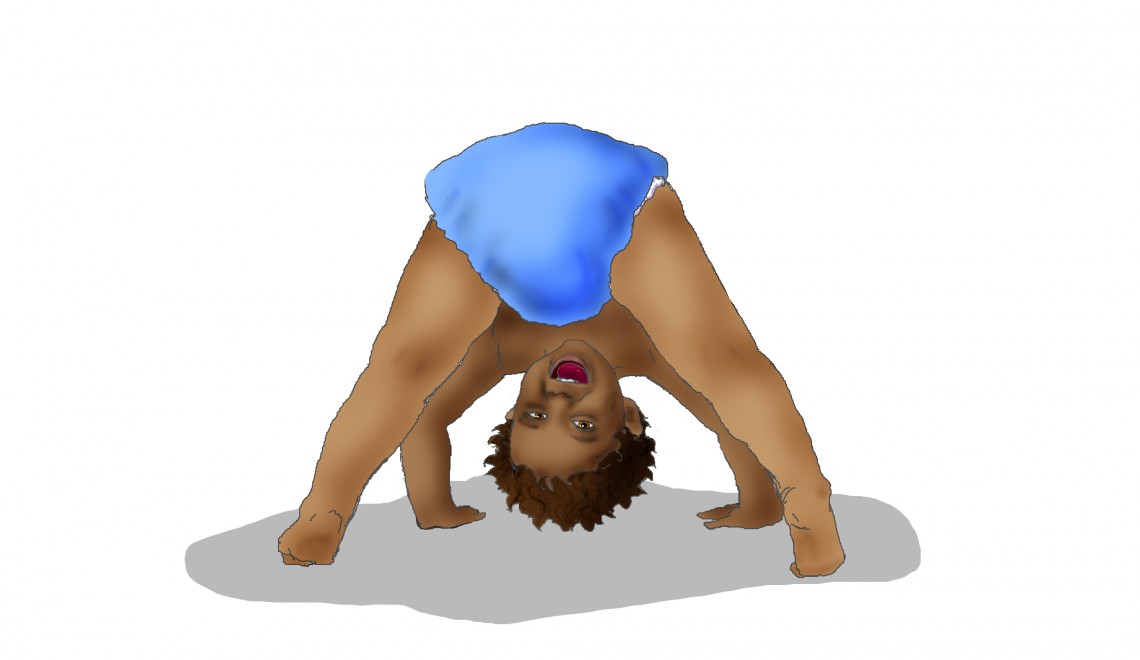 So remember how I inadvertently taught Adoti how to say, “What?” I’ve since regretted doing that because there is something quite startling about an almost-two-year-old (two months to go!) looking you dead in the face when you call her name and saying, “What.” It’s surreal. But I’ll chalk it up to development and those doggone milestones.

When the word “What” is not rolling off her tongue, Adoti is jumping up and down. As in literally jumping up and down. That’s how she gets around these days – when she’s not dashing from one corner of the earth to the other like a roadrunner – with two feet in the air. I’ve read that learning how to jump is a key milestone among kids her age. Yeah, no kidding.

So now we have a new bedtime routine. Jumping off the coffee table (I must stress that it is wooden, no glass involved), onto the couch and then on to the floor …and then repeat.

At every stage down that dangerous path, I’m yelling, “Stop it Adoti!”

She looks at me gleefully, one leg already over the arm rest, and says, “Okay!” which she always says on a rush of breath so that it comes out, “Okehh!” (she knows how to say it but she couldn’t care less what it means).

“Get down! No for climbing!”

“Yes!” she says, hopping of the couch and heading straight for the coffee table. She means “Yes!” but when she says it, it comes out “Yeish!”

Which makes me laugh to no end because I used to have a friend in college who used to say, “yeiz” for “yes” and “impoezzibo” for “impossible”.

So while I’m supposed to have my stern, no-nonsense face on, there I am laughing, not helping matters at all. In the end I say, “This is the last time I’m telling you to stop it. Next time you’ll be in a time-out!”

But off she goes again, jumping on and off household furniture like a ping pong ball on steroids.

At this point I have to put her in a time-out. But because I have never been able to get her to sit still in a corner, her time-outs are on my lap, where she has to sit for two minutes …okay, let’s just say for many seconds.

She hates, hates, hates it, wriggling and squirming all the way through. Trying to guilt me into letting her go by turning her head at an uncomfortable angle and gazing tearfully into my eyes. When that fails, she reaches out her hands in Nanny Lucy’s direction, wailing pitifully. Eventually, I let her go, more because I’ve been exhausted by her antics than anything else. But I do kneel down so that we’re eye-to-eye (well almost) and tell her not to jump on and off of things willy-nilly.

And for a few moments, she seems to get it. For a while, there is peace in the house but then within minutes she’s back on the merry bandwagon again, hooting and hollering like it’s her birthday and leapfrogging over pieces of furniture like they were miniature size.

So we hit ‘bo selecta’ on the whole process. Mind you, this is usually at about nine o’clock at night. But for Adoti, it may as well be high noon. Sigh.

When I threaten her with a time-out for the 57th time, and start to rise, she actually backs into the corner of the room and says, “Stop it!” which comes out, “Schobish!”

You have to laugh. As you can imagine, discipline in my house is an absolute disaster. Is she a toddler or a small-bodied comedienne? Either way, that kid’s got my number, I’m telling you. She gets me every damn time with her impish grin and her comical antics. I wonder where she gets it from, I really do.

Anyway, I told my sister about the latest word in our vocabulary and she began to chuckle, her eyes twinkling with the mischief of an almost-two-year-old.

“Are you sure she’s saying, ‘stop it’,” she asked, trying for innocence and failing miserably.

“Well, yeah. What else would she be saying? I say ‘stop it’ to her all the time, so she must have caught on,” I say, insulted. Why wouldn’t my daughter know how to say ‘stop it’? Huh? Why?

“Uhhmmm …are you sure she’s not saying, “Shove it!”

You have to laugh.