Is the print media dying? 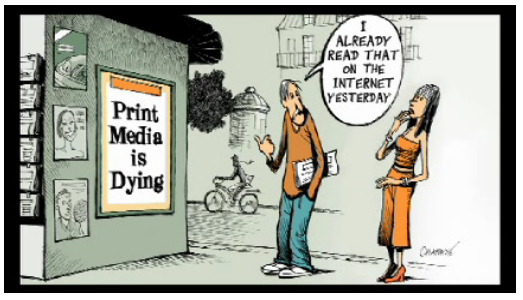 I have a stack of books sitting unread on a dusty shelf. Some I bought myself. Others I borrowed from family and friends. There they sit, untouched, even when the very thought of reading a new book is exciting. You run your hands over the cover, shuffle through the pages as if the book were a deck of cards, and read the plot teaser on the back cover.

Revelling in that feeling of anticipation, you put the book down, fully intending to pick it up later. But later never comes. You never quite get to the reading part, and even if you do, midway through the first or second chapter, you are interrupted by some other pressing need. In my case, that pressing need would be the never-ending compulsion to see what’s happening on Twitter.

Twitter breaks everything down into 140 characters. It bypasses the excitement and anticipation, and goes straight to the heart of every matter under the sun. Twitter updates and headlines are designed to grab your attention. If you read something and it doesn’t grab you, you move on to the next thing. When you do find something you feel is worthy of your attention, all you have to do is click on a link and voila, you have instant access to a full length article, and in some cases, an entire book.

Digital media platforms have replaced the old-fashioned idealism of a good book with an instant Internet fix. And let’s face it, not many of us had the patience to read a book from beginning to end in the first place. We might buy newspapers and pass them around, but we’re still lacking a credible reading culture. I’m including myself in that generalisation, seeing as the last book I acquired was downloaded. And I haven’t even read all three parts yet. Talk about lazy.

Then again, it was Fifty Shades of Grey, a novel that I have since described on Twitter as a “glorified Mills & Boon”, which as derogatory as it sounds is a polite way of putting it. When I was in high school, as soon as we got our hands on a ‘Mills’ we would flip through to the dirty bits, red-blooded, hormonal teenagers that we were. With Fifty Shades of Grey and the other two books in the trilogy, you get an instant fix of naughtiness, just like you would on the Internet. The plot seems unnecessary. In fact, it obscures the real intent of the novel, which seems to be an exploration of the meaner side of erotica. And despite all that, or perhaps because of it, the books are bestsellers in the US, the UK, and the rest of the world. They are even making a movie. But I digress.

Middle-class African audiences, both here at home and in the Diaspora, have warmed up quickly to the ease and convenience offered by the Internet. In this era of the smart phone, we literally have the world at our fingertips. The next generation might forget that books even existed, if our current preoccupation with online publishing is anything to go by.

Even so, they are attempts being made to route audiences to an actual hard copy. For instance, there are various Twitter book clubs that periodically ask Twitter users what they are reading. But who can tell for sure if we are actually reading the classics we tweet about. Just the day I saw this on the social networking site: “What are you reading?” The response, “I’m not reading, I’m tweeting.” And there you have it in a nutshell.