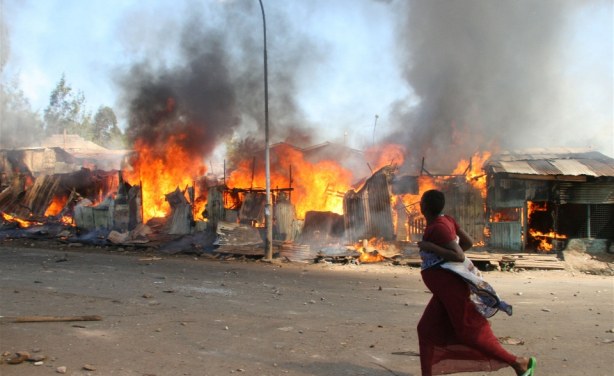 It doesn’t feel like Christmas. Despite the obligatory festive lighting that was draped around every mall as early as November, the mood is sombre. After more than a year of active electioneering, there’s a tangible lethargy that if left unchecked, could possibly drain all the joy from the season. Let’s face it, it’s near impossible to celebrate the birth of a saviour when the salvation of this nation remains elusive.

Kenyans have known much tragedy in the past few months.  It is disheartening that in just a few weeks, about 100 citizens have lost their lives on our roads. And downright chilling that many others were killed by the police as the tale of two elections unfolded. As if that was not enough, the 2017 elections saga was also punctuated by instances of systematic sexual violence against women, girls, and men.

A Human Rights Watch report exposes the unbridled terror that was unleashed on civilians by policemen, and men who wore uniform. The report notes that the physical and sexual violence occurred mainly in the opposition strongholds of Nairobi, Nyanza, Western Kenya and the Coast.

By international human rights standards, and conventions endorsed by the United Nations and the global community at large, rape has long been recognised as a weapon of war. It is a tactic used to instil fear, humiliate, and dominate. Amnesty International has even gone so far as to define women’s bodies as part of the terrain of conflict. Rape, it says, is an orchestrated tool of combat often used by armed forces, State-backed troops and irregular militia to attack civilian women, children, and ever more commonly, men.  It is often used in ethnic conflicts as a way for attackers to perpetuate their social control.

So we can accurately establish that rape is weaponized in times of war and conflict to subdue specific populations. In Kenya, this Human Rights Watch report has confirmed what appears to have been a wave of pre-meditated sexual and gender-based attacks. This then begs the question:

Why was the State at war with a section of its citizens? While the answer to that question is obvious it doesn’t bear mentioning.

When a woman is raped by three policemen three days after having a baby, the answer to that question loses all relevance because there can be no reason, nor justification for such an atrocity.

I have said it before, and I will say it again: it will not be business-as-usual until our current leadership acknowledges, apologises and makes amends for the trauma that was visited on members of select communities in this country. Silence after the fact is just as much an affront to humanity as the crimes themselves. If this country intends to move forward as a unit, someone somewhere needs to step up and admit that a huge injustice has been committed, and in some way, offer a hand of healing.

Rather than hosting flamboyant Christmas parties, and attending overtly publicised football matches, Uhuru Kenyatta and William Ruto must begin to think deeply about truth, justice and reconciliation. Thanks to a fractious campaign period, and the pre and post-election violence that very often targeted women and children, the fabric of Kenyan society now hangs by a thread. While our nationhood is not completely broken, there is a trauma within certain communities that runs deep. That trauma cannot be wished away. There are wounds that cannot be papered over by the glib ‘accept and move on’ narrative. It might the hardest thing the Kenyan collective has ever been called upon to do, but the sins of the past must be confronted if there is any hope of changing the future.

So yes, the festivity of the season is somewhat lacklustre. Rightly so. This is not a joyful time for the families who were almost irreparably damaged by agents of a state that should have been protecting them. Rather than celebrate, every Kenyan should reflect on their own humanity. There is a dignity which must be accorded to every human being without question. ‘Irregardless’ of their tribe, socio-economic status, or political affiliation.