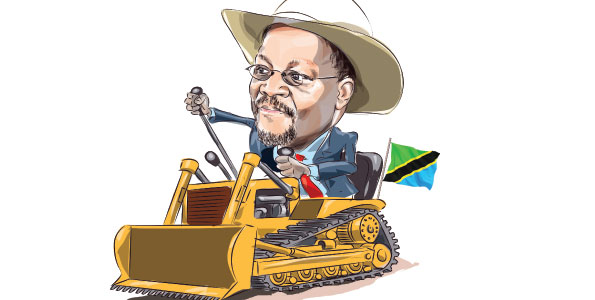 John Pombe Magufuli (JPM) is like James Bond. He gets things done. If he started introducing himself like, “The name is Magufuli, His Excellency John P. Magufuli,” I wouldn’t be mad. Really, I wouldn’t. From the moment he was sworn in, the Prez has been sweeping TZ with a big broom. Gotta love him.

Gotta love his slogan too: Hapa kazi tu. Short. Tough. To the point. That’s what we need here in East Africa. We need to stop trying to buy our way out of everything and instead, put in the work to get things done right.

JPM (incidentally those are my initials as well – Julie Phoebe Masiga – great minds folks, great minds) is a hero among men. He’s leading by example; showing the people how it’s done. And for that I salute him.

In some ways, he is reminiscent of Kenya’s third president, Mwai Emilio Kibaki. He was a man of action as well. He walked slow and talked slow but he was all about a work ethic. You will remember that his campaign slogan ahead of his contentious second term was “Kazi iendelee”.

Despite a slew of corruption scandals and a disputed second term in office, the Kibaki administration (aided in no small part by former premier Raila Odinga) managed to get a few good things done. One obvious thing Nairobians can thank Kibaki and Raila for is our upgraded road network. Every time I get lost in the labyrinthine system of main roads and slip roads feeding into and out of Thika superhighway, I count myself lucky for the #FirstWorldManenos in our emerging economy.

And at the speed that JPM is moving, Tanzanians in Dar es Salaam and beyond will soon begin to feel the pleasant effects of change. Heck, I wouldn’t be surprised if he managed to cure Dar’s traffic headache. That I think might be the true test of his miracle-working abilities.

Three years into the Kenyatta/Ruto administration and we still have a traffic situation in the city. We’re building a multi-billion-shilling speed train but somehow cannot figure out a way to manage slower-moving motor vehicles.

Mad, crazy traffic jams are one of the things the three elder sisters of the East African Community have in common. I think we should throw down a challenge: The first President to figure it out gets to be President for life.