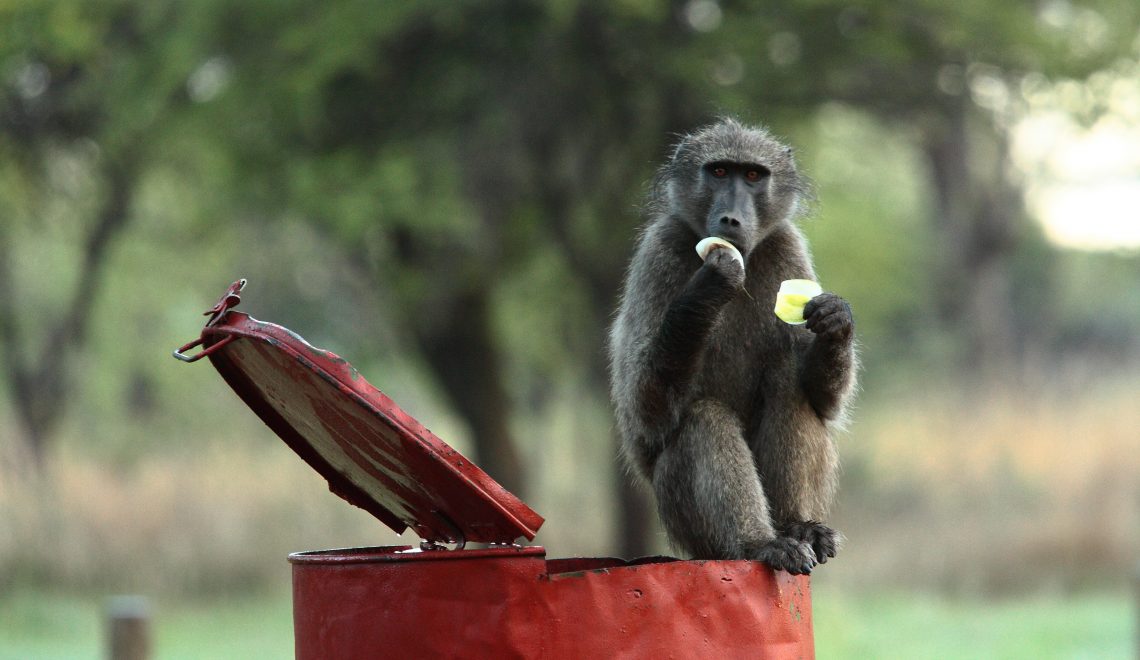 Guys. I know I’ve lied about this before. That story about the baboon in my house was a hoax, and I apologize. I lied, and I’m sorry. You’ll be pleased to note that my remorse isn’t enough for the ancestors, and I’ll tell you why.

For the past few months, my home has been overrun by mummy and daddy baboons, and all their children. And man, those animals have a lot of children.

There are no dry spells in baboon country. Plus with Covid-19, I guess they have nothing else to do other than have sex and invade homesteads looking for food.

Can’t say I blame them. I’d also be hungry if I were making babies all the darn time. Anyhow, let me not veer too far away from the point, which is this: my household has been taken over by a family of four-legged primates who come and go as they please. They are a vicious lot who always leave behind a trail of destruction.

See, I used to have a kitchen garden, which was a great source of pride. If you’ve met me, then you know that I have two left thumbs, and none of them is green. So when my small-small veggie patch took root and flourished, I was super excited. I mean, my days of buying spinach grown in sewage were over. That was until the baboons showed up in their numbers.

They are so ruthless, those big-bummed buggers. Nothing is off-limits, even if they are not going to eat it. They uproot shambas line by line, ripping things out of the ground, smelling them and then throwing them away if they don’t tickle their brutish taste buds. I’ve ‘lived’ with them for months now, and I know what they like to eat, and what they love to destroy.

Carrots, sukuma wiki, spring onions and capsicums are not their favourite. They are more partial to pawpaw, avocados, bananas (no surprises there) and, oddly enough, dog rice and peanut butter. No idea why.

Most of the things they like are found in the kitchen, so God only knows why they bother ripping my poor ‘shambalette’ to shreds every time they come around. Cruelty is a sport for these beasts. Then again, maybe baboons are from Mars, and humans are from Venus. Either way, after my latest face-to-face with a big ole monkey in my kitchen, my sister gave me a catapult, which we now fondly refer to as a ‘baboon gun’.

Shooting stones at baboons is our new sport. My house manager is a master in the art of stone-throwing (but does she say?), and flinging missiles at big monkeys has become a daily occurrence. Yes, I understand that they expend a lot of energy procreating and that this new coronavirus has reconfigured the food chain, but look, I’m not about to adopt a family of apes.

We do this with the confidence that we will always be around to protect our families or have the means to protect them in our absence.

It sounds a lot like the global power structure that is replicated in many countries around the world; this one included. People are tired, hungry, angry and desperate to stay alive, but governments keep stoning them, pushing them to their limits and then pushing them again.

After months of sharing my compound with baboons, I am well aware that they are getting to a point where they will no longer approach with stealth; instead, they will attack in anger and frustration. They will no longer settle for stolen bounties or reluctant donations from hoarding humans. They will attempt to gain control of the food supply, and that can only mean war.

If it does come to that, may the stronger primate win. Until then, I’m appealing to the Kenya Wildlife Service to manage the baboon encroachment problem that is affecting neighbourhoods across the capital, particularly those that border forests. I’m also appealing to every other government authority to stop treating tax-paying Kenyan citizens like baboons.