Beware the ides of March…again 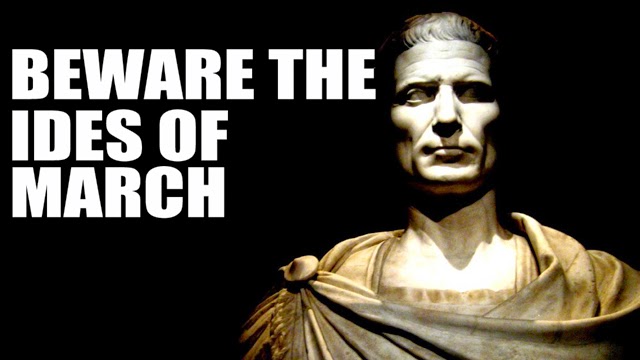 I’m pretty sure that at about this time last year, I issued the predictable ‘beware the Ides of March’ warning, given that it was the month of March and well, creativity was running on a post-Valentine low. Damn that Saint Valentine. And how do I find myself in the same mental space again? Damn those Ides.

What is/are the Ides of March, anyway, apart from a George Clooney movie? Well, turns out that during the Roman Empire, every month had an ‘Ides’ and it usually rolled around on the 15th. Months of the Roman calendar were arranged around three days – the ‘Kalends’, the ‘Nones’, and the ‘Ides’. These three days acted as reference points from which the rest of time was told. Ides often landed on the 15th day of March, May, July and October. For all the other months, the Ides was the lucky number 13. Go figure.

But everyone was fine with it. There was really nothing to write a relationships column about until 1601 when Shakespeare wrote Julius Caesar. In it, ‘beware the Ides of March’ is the soothsayer’s message to Caesar, warning of his death. So the idea that bad things happen on the Ides of March (or indeed, in the month of March), was a creative product of the playwright’s imagination.

But it seems to me that March does suffer from the Ides Effect. It’s not that bad things happen, it’s just that nothing good happens. March has an ‘old-married-couple’ feel to it. It’s the ugali and sukuma wiki month. Boring and predictable. Ambling along uneventfully like 31 days of no thunder. No ‘durama’. No vindeo. March is meh. At least that’s what it feels like to me. It’s the month when you literally hear the sound of monotony as you plod one foot in front of the other.

Romantically speaking, there are other periods throughout the year when your relationship with the man you usually love to bits, falls into a pile of boring pieces. Periods when the live wire short circuits leaving you holding one end of a relationship flat line, and he holding the other. In those moments, your imagination begins to churn out creative products of its own and you might begin to envision a life with someone more exciting. Someone who would sweep you off your feet and hold you suspended in the air until the end of time.

An award winning script begins to take shape in your mind, complete with castles in plush neighbourhoods, knights in CEO armour, and car(riages) with horsepower. As the plot develops, you paint the other side just a little bit greener and pave the streets with that much more gold. Pretty soon you’ve created a little Utopia in the world of your dreams. Meanwhile, Mr Man is laid back on the couch with his feet on the coffee table, scratching his balls and watching the footy, unaware that you’re about to write him out of the series.

Worst-case scenario, he never lifts his head and remains oblivious to your creatively degenerate state of mind. Best case? He lifts his head, smiles, blows you a kiss and offers to do the dishes. Or make dinner. Or change the baby’s diaper. Or do a grocery run to buy some milk and bread. Some thoughtful act of service that reminds you, even in the throes of March monotony, that good living is in the details and the day-to-day. That with every passing second, you’re creating poignant memories, even without the drama and imaginary scenes from movie screens.

So I welcome my kind of Ides, when nothing good happens and the month ambles along like 31 days of no thunder. Because it’s on those days that I truly know what love is.